SCIO, N.Y.—Gunner, a bomb-sniffing dog mustered out of the Marines for canine post-traumatic stress disorder, has found a new home with Deb and Dan Dunham, whose Marine son died in Iraq protecting the men beside him.

With patience and a red-rubber toy, the Dunhams are trying to coax Gunner back to emotional health. With liquid brown eyes and Labrador loyalty, Gunner is giving the Dunhams back a little of what they lost. Together, they are healing what they can and living with what they must.

“My Marine never came home,” says Deb. “I have a place for a Marine.”

In 2004, during a patrol near the Syrian border, Cpl. Jason Dunham found himself fighting an insurgent hand-to-hand on a dusty road. When two other Marines ran over to help, the Iraqi dropped a hand grenade.

Instead of rolling away, Cpl. Dunham covered the grenade with his helmet, shielding his men.

Though peppered with shrapnel, the other Marines walked away. A grenade fragment penetrated Cpl. Dunham’s brain, sending him into a coma.

Doctors in the field gave him up for lost, but he survived the trip to the Naval hospital in Maryland.

Deb and Dan met Jason there, expecting to watch him recover. Instead, doctors told them that their son would never regain consciousness.

In keeping with instructions Jason left before going to war, the Dunhams removed him from life support. He was 22 years old.

At the White House in 2007, then-President George W. Bush presented the Dunhams with their son’s Medal of Honor, the nation’s highest military award. 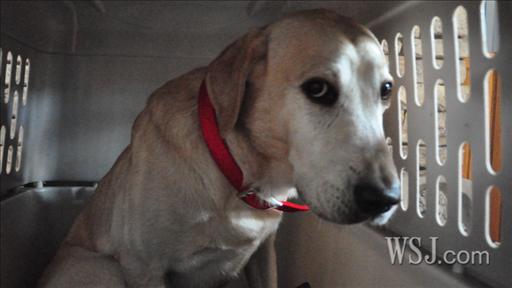 In 2004 Deb and Dan Dunham lost their son Jason to an insurgent’s grenade in Iraq. Now the Scio, N.Y., couple is healing — and being healed by — another wounded Marine: Gunner, a bomb-sniffing dog traumatized by war.

Gunner’s wounds are emotional, not physical. Trained to sniff out explosive booby traps, he was deployed with the Marines to Afghanistan last fall. His trainer wasn’t sure what trauma pushed him over the edge—the explosions around the camp perhaps, or gunfire from the rifle range.

Told to hunt for explosives during trial runs, he’d make a token effort then circle back to his trainer’s side, hoping to play fetch. Gunner proved so skittish that the troops never risked sending him on patrol.

After almost a year trying to retrain him, the Marines decided that, as a warrior, Gunner was beyond salvation. “Gunner is declared excess,” the Marines wrote in August.

Cpl. Dunham and Gunner had been subjects of separate articles in The Wall Street Journal, and, at the Marines’ request, the paper forwarded the names of the Dunhams and scores of others who had written asking how they could adopt the dog.

“He was declared excess, which really offended me because he’s not excess,” says Deb, a 50-year-old home-economics teacher. “He’s just disabled.”

The Dunhams filled in an adoption application, including an agreement not to sue the government if things went wrong. At the end of August, they drove 16 hours from their home in Scio, a town of 1,900 in western New York, to a kennel in South Carolina to pick Gunner up. On the drive home from South Carolina, Gunner curled up with Deb in the back seat of the pickup truck. He slept next to her in the hotel bed when they stopped. Soon after arriving in Scio, he switched his allegiance to Dan, following and gazing at him with adoration. It soon became obvious why Gunner wasn’t cut out to find bombs. Even the sight of cameras sent him slinking behind the sofa that sits beneath the red-and-white banner with the gold star that denotes a child lost in combat.

Days after Gunner arrived in Scio, the town was hit by a storm. Gunner was outside playing when the lightning started to flash, and he threw himself against the Dunhams’ sliding door, trying to get inside.

Dan was hoping to persuade Gunner that the whole house is a safe place, not just his plastic kennel. But he soon realized that it was the only place Gunner was going to feel secure that night. Dan moved the kennel into their bedroom, and Gunner dove inside, cowering with his nose in the corner and his tail sticking out the door.

Ziggy, the Dunhams’ 120-lb. yellow Lab, stood watch over him for the rest of the night.

“I’ve never seen a dog so panicked over a thunder-and-lightning storm,” says Dan, 49, a former farm and factory worker.

The following day, Deb got special dispensation from the principal and took Gunner to school with her. He slept on a pillow next to her desk, snoring loudly as Deb spoke to her students about the emotional scars that some war veterans bring home with them.

“It’s an illness of the mind that can affect the body,” Deb told them.

She spoke from experience. Hundreds of military visitors have appeared at the Dunhams’ door since Jason’s death, some of them still crippled by their own combat experiences. Both of the men that Jason saved struggled with the fact that their friend had died to save them. One wrestled with alcohol and drunk driving. The other ended up so disabled by PTSD and traumatic brain injury that the Marines discharged him.

Gunner, trained to sniff out bombs, suffered from PTSD and was sent home from Afghanistan. Both men grew close to the Dunhams and rely on Deb for motherly advice when they go astray.

Gunner is making slow progress, too. These days he sleeps under Deb’s vanity, nose out instead of nose in. Dan spends hours playing fetch amid acres of fields and rolling hills. He is, he admits, in love with Gunner. “I think Gunner will overcome,” Dan says. “Everybody’s resilient—human and dog.”

“To us it’s like Jason died yesterday,” says Dan. “To Gunner, whatever happened to him—it’s probably like that happened yesterday. We get up each day and find a new way to get through the day realizing that Jason’s not here. We have to pass that on to Gunner.”

Article written by Michael Phillips. Write to him at: michael.phillips@wsj.com

QUESTION FOR YOU: Do you have a rescue story to tell? Please place a comment and share.

This is Chloe. She was the “property” of a dog-hoarder who owned over 30 dogs. Sheryl tells us Chloe basically lived in a small crate for the first year and a half of her life.  “But for the past five years she’s the happiest little dog we’ve ever had!” Sheryl says.

Thank you, Sheryl, for sharing Chloe’s darling picture wtih us, and for rescuing her.

Reminder: We have many more pet photos to post with each blog. Stay tuned for your pet’s picture.